How Graphic Design For Print Has Changed Over The Years


I'VE BEEN IN THE GRAPHIC DESIGN & PRINT BUSINESS SINCE 1975. After 3 years at college learning about design, typography, the printing process and bookbinding techniques, I was thrown into the fast-moving world of advertising, graphic design and print. I started at a small printers in Hertford on £18 a week! 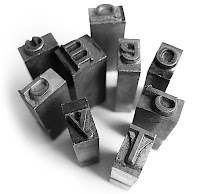 Over the years, my training and years in the business means that my ‘eye for detail’ when it comes to correct letter spacing in typography and the flow of text with multiple columns is spot on. Letter spacing is particularly important in the setting of headlines. Spaced correctly, it is pleasing to read and easy on the eye. This is why my logo design work is more involved than people think. My computer sets the words I type, but I always go back over headline text and kern (tighten-up individual characters to each other) the letters as this is where the human touch is needed.

Back in the late seventies, the general public did not know what a font was. Now, since computers have been around, virtually everyone knows that a font is a typeface used to set text within documents. Ordering typesetting was originally done by sending a secretary’s typed words (on a typewriter) to the typesetting company with instructions hand-written in the margin, instructing what font, size and leading (line spacing) was required. Advertising agencies even used to employ a full time ‘typographer’ to do this every day. These guys worked closely with their fellow graphic designers. All the text that needed setting was given to a compositor/typesetter by either getting the office junior to run it round on foot to the nearest typesetting company or it was sent over on the telecopier machine. It was not long after all this that the word processor replaced the typewriter, the telecopier replaced the post, the fax machine replaced the telecopier and email seems to be replacing the fax machine. When was the last time you actually faxed something? Or received one? 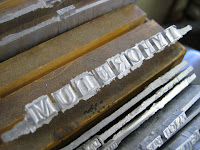 When I was designing work for clients back in the late seventies, visuals (mock-up layouts) were all produced by hand using coloured Magic Markers, Letraset and Rotring Pens! When those layouts were approved, (which the ad agency rep would physically take to the client to view), the final approved copy (words) would then have to be typeset by a typesetting company. Hot metal was around then. Lead type that had to be either hand-picked from a case and assembled by the skilled compositor or typesetter who could read everything back to front, or it was set on a Linotype machine. Here the operator would type on a keyboard and then ‘slugs’ of type were actually cast in molten lead and spewed out into lines to be gathered and compacted into a ‘chase’ (a metal frame holding composed type). Even then, the type had to be proofed by inking the type and taking a ‘pull’ of it all by running a roller over a sheet of paper aligned on top of the now, inked up, type slabs. Imagine the client changing a line of text to bold. The whole slug of lead had to be removed and re-cast again and replaced into the chase. Now we just highlight with the mouse and click ‘bold’. 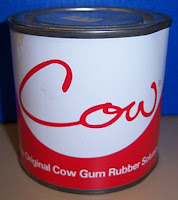 Hot metal typesetting was soon left behind by the coming of photo typesetting. Photographic paper was typeset by photo exposure. No hot metal, no battered letters, no ink, just consistent quality typesetting. Either way hot metal or photosetting, whatever was output, this went to a ‘paste up artist’ who would cut the type up using a scalpel into manageable blocks and paste them onto a stiff board. Heading at top, text below etc using something called ‘cow gum’ - a rubber based adhesive. The whole artwork sheet (after checking) would then be marked up for colour by way of an overlaid translucent sheet with instructions of what colour went where and then the whole lot would go off to the printer to be photographed, film made, which in turn was used to make the final printing plates. A few years on and, as we all know, computers came along. When Apple Computers brought out the first desktop publishing computer, the Apple Macintosh in 1984, things really hotted up for designers, ad agencies and printers. Typesetting and block makers gradually folded and the skilled typographer was redundant and email was added to the speedy way to get work done. 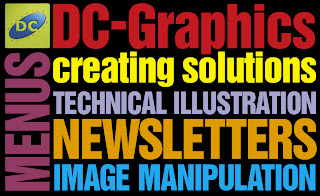 But remember this - The computer is a tool. Having a computer with a publishing program does not make you a graphic designer. You need years of training linked with professional trade industry software that can do the job and output files that your printer (or web designer) can read on their computers. So don’t bother with all that, if you have a marketing project that involves design and final print, come to me; Doug at DC-Graphics in Barnet - where my training, eye for detail and years of experience will make the path between concept and completion a short and very smooth one. You can also email me direct by going here.
Posted by Doug Canning, DC-Graphics at Wednesday, July 27, 2011

Doug Canning, DC-Graphics
Barnet, Herts, United Kingdom
Self employed graphic designer and print specialist trading as DC-Graphics. I have over 25 years experience in design and print. With an eye for detail, especially regarding quality typography and layout etc. I handle everything from concept to completion. In fact, your image is my business!